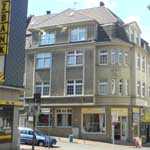 "Pflichtverteidiger" - in English also: Duty Solicitor / Counsel for the Defense Appointed by the Court

German Law knows no legal aid ('Prozeßkostenhilfe') in criminal proceedings nor a poverty lawyer. You will have to pay your attorney yourself unless the sentence is one of acquittal or the proceedings are terminated on public expenses.

The only exception is the Mandatory Defense ('notwendige Verteidigung', see sec. 140 et sqq. of the German Code of Criminal Procedure), in which case the offender must have an attorney. If he did not choose one already, an attorney must be appointed to him. This attorney's fees are payed by the State, which will, however, subrogate against the convicted offender. Within a few days period the accused is permitted to choose the attorney to be appointed, thereafter the court does. Do never believe in rumors saying a judge will probably choose a rubber stamp or conviction escort.

By the way: If you are not familiar with the German language, the services of an interpreter must and will be provided. But don't think this is a practicable way to keep interchanged with your attorney at the trial. What you really need is an attorney who speaks your very own language sufficiently and with whom you can communicate confidentially and without delay.

The most important cases of a Mandatory Defense have been

The assigned counsel ist payed by the State with fees far below the legal fees of a counsel of the accused's own choice ('Wahlverteidiger'). - Anyhow, we are willing to be appointed your assigned counsel.

Terminology: There is only one German term for (defense) attorney, advocate, barrister, counsel, counselor, lawyer, proctor, solicitor: "Rechtsanwalt", "Anwalt" in short. A defense attorney / lawyer or trial lawyer is a "Strafverteidiger" or "Verteidiger".